How does High Visibility clothing work during the day is a simple question once you understand the process that is occurring, High visibility clothing reacts to a light source or are very different in color than the background environment. During the day the strongest light source is the sun. Depending on what the clothing is made of will determine how it reacts with this light.

One type of high visible clothing is the florescent types. These come in green, blue, red, pink, orange and ye

llow to name the most common. The term fluorescence is a type a dye that will appear to glow when the rays of the sun hits it. The lower the light source such as at dawn, dusk or on cloudy and foggy days, the glow becomes more prominent. At night it does have some effect but there are many other types of high visibility clothing that work much better.

The types of clothing that is equipped with the retro-reflective technology work the best of all the passive high visibility clothing available today. This type of clothing has incorporated into it either micro glass beads or micro prisms. It is the glass beads and prisms that reflect any light that it comes in contact with to be redirected back on a parallel course but in the opposite direction to its place of origin. This makes it possible to be noticed by any person at the origin light in a car where the head lights are the light source. This technology works day and night making the wearer of this type of clothing mo 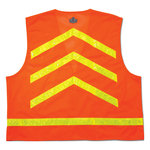 re visible than others around them. Just like the florescent colors, the retro-reflective clothing differentiates the wearer from the background. When the sun hits this type of cloth, the reflection of the beams goes out in an intensity that is stronger than most other light sources around on earth which makes the person highly visible to others in their vicinity.

The entire article of clothing does not have to be made of this reflective material. Road workers wear high visibility clothing that uses a combination of the above two approaches. They have fluorescent apparel and have stripes of reflective material applied to the clothes. This two way approach meets or exceeds OSHA and ANSI standards for workers who are in a hazardous place like repairing roads where vehicles are present. This combination approach has reduced the number of injuries to workers in such places significantly since it was first mandated by the federal government by making each worker stand out from their background environment.

The final type of high visible clothing that can be used uses the same technology vehicles, aircraft and towers use to become more visible to people around them. This is the use of a light source. For a person to wear lights, the most common are small LEDs. It is true it has a greater effect at night but it also helps a person stand out from their surroundings during the day.

These are the most common types of high visible clothing available today. Choosing the right one for you is determined by your taste and needs.