These are personal protective and safety equipment to assist a person in seeing in low and no light conditions.

There are several reasons LED are used. One of them is because of their efficient use of power from a limited source. This makes it possible for the batteries to be small while still supplying the required amount for the light to have a reasonable life time. Depending on the size and number of LEDs being used in the lamp, the small disk lithium batteries could be the power source or up to 3 AAA batteries are used.

Another factor into why LEDs are now being used in head lamps is they are small and lightweight along with having a long life span and are not easily broken. Unlike a traditional lamp, the LEDs are actually a light emitting diode that does not have a filament that could be damaged. This makes this light source nearly indestructible by people that use this type of personnel protective equipment in their work and play time. It is why campers, cavers, miners as well as joggers and cyclists wear the headbands that have LED head lights made into them.Unlike the traditional head lamps people wore on their heads in the past, the LEDs do not generate an 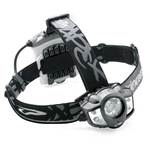 y heat. This makes them more comfortable to wear for extended periods of time. This cannot be said about the traditional incandescent lamps or even the really old fashion candles that were used in the past by those needing to see in low light conditions.

Depending on the purpose needed of the headlamp will help in determining the power you might need. There are some that are used in sport activities that only need 50 lumens while others require a more powerful light source in which a 100 lumens headlamp can be chosen. There are also several levels between these two that many find appropriate. The exact amount of light you need is dependent on how you plan to use it. 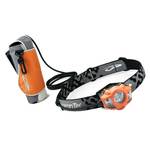 There are also several types of formations the LEDs can be used. For a stronger beam there is generally a powerful central LED that is sounded by smaller ones. There are also lamps with just smaller LEDs present when the purpose is to shed small amounts of light so the wearer can be seen by others in their vicinity.

The LED headlamp gear is attached today by a wide elastic strap so it will be firmly mounted on a person’s head and still providing a level of comfort to them. With their limited power source the energy being provided can last between 75 and 200 hours for the person to use. This makes it possible for the wearer to use the same batteries for over a week and maybe for months. They are the right gear to help you see at night or in a dark place as well as being seen by others.