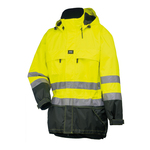 Whether at work or play, keeping visible is key to keeping safe. Even to the most keen-sighted drivers, runners or cyclists wearing simple street wear are only visible up to 200 feet; hardly enough time to be proactive in almost any driving situation. Reflective clothing can increase that visibility to more than 1000 feet, day or night.  According to the Centers for Disease Control and Prevention (CDC), a pedestrian is killed every two hours in the United States and an injury to a pedestrian occurs once every 8 minutes with most deaths occurring in urban areas, in non-intersection areas and at night.

Cyclists, runners and walkers aren’t the only groups at risk of being killed or injured by a motorist. The Bureau of Labor Statistics, as cited by the CDC, reported that in just 2012, 130 workers were killed at road construction sites and that “transportation incidents accounted for 76 percent of roadway work zone fatal occupational injuries in 2012”, with 67 percent of those incidents involving a pedestrian worker being fatally struck by a vehicle.

It is with these reasons in mind, that we have established the core of our business as helping to protect you and your loved ones from the dangers of working or playing in low-light conditions. Offering highly visible reflective clothing alongside headlamps, bike lights, flashlights and lanterns online, NightGear works to protect as many of us both day and night.