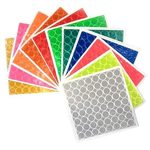 To find out who is using reflective tape and dots, all you need to do is look around in public. With the roads across America becoming more crowded every day, the use for this passive but effective safety device has grown immensely.


The most common place you will find retro reflective dots and tape being used are on road workers, both private and public. They are the most helpless and vulnerable of personnel who are in danger of being struck by an oncoming vehicle. The visibility of just how the dots and tape can be used effectively has been picked up by many of the motorists that have seen them when traveling the highways of America.


What has been observed is that the dots and tape sections have been placed not only on the vests of the workers but also their helmets, shovels, rakes and other pieces of equipment including the vehicles. This makes it easier for motorists to see and identify the objects so they can be avoided more easily.


By seeing them used by professionals, the public has now started applying them to what their children wear and use, mainly so their walk to school can be safer. School children can now be seen with dots and tape being used on their garments along with the back packs they carry their school supplies in. There has already been a study that has proven that school age children with this passive safety device placed on their exterior clothing can be seen up to three times farther away by approaching motorists than those without it. Since this has become known, even more patents are now adhering refractive dots and tape to their children’s clothing and pack backs to help keep them safe while traveling to school to play.

One practical use of the reflective dots are their use on street mail or newspaper boxes. A specific color dot is placed on your receptacle to identify which newspaper you will be delivered - this saves a lot of time for the delivery person - they see the color dot and know exactly which paper to deliver. Since the dot are reflective, they can be seen in low light which helps greatly for the dawn deliveries of newspapers.

Others on the road are also increasing their use of reflective tape and dots to help keep them safer. This group of civilians includes those that wish to exercise out in public like the cyclists and runners. The cyclists use the reflective tape on their bicycles so others on the road can easily see them even in the twilight hours when visibility is at its poorest. The dots are also being applied to helmets and shoes which announces to others of their presence in a positive manner. Runners are also applying them to their helmets and shoes along with their belts and on their clothing so they will be seen.


To help keep items at home safer, the use of dots and reflective tape are also being applied to mail boxes and flag poles at private residences. They can also bee seen on fence posts that outline driveways and the border of a property so motorists can easily identify just what the limits are and where they should avoid being.


There are no limits to just who can use reflective dots and tape. They have become so well known and being used in so many ways it is starting to set a fashion statement for many of the younger generations. Yes safety is now in fashion.